“The Mystery Journey of Johannes and Maria” Dramatic Performance on November 14, 2014 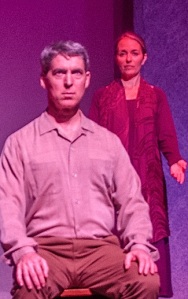 On November 14, 2014, Nashville will welcome professional actors from New York, Laurie Portocarrero and Glen Williamson, for a performance of The Mystery Journey of Johannes and Maria, which is currently touring the US and Canada. The play highlights the dramatic relationship between the two main characters of Rudolf Steiner’s Four Mystery Dramas.

Johannes, a young artist, befriended by Maria, the most advanced pupil of a high spiritual master and initiate, seeks his own spiritual development. As he struggles through joy and despair, certainty and illusion, triumph and disaster, his friend accompanies him, guiding him along the path with her own ever-growing strength and love. The drama traces the characters’ paths and destinies from ancient times up to the twentieth century, vividly depicting the interplay of karma and free will at work as human beings struggle to take responsibility for their destiny.

The performance will begin at 7 p.m. with a 10 minute intermission at 8 p.m. and will conclude at 9:10 p.m. It will be held in the chapel at Linden Waldorf School, 3201 Hillsboro Pk., Nashville, TN 37215. Admission is $20 (suggested donation). Both sponsorships and scholarships are available. The event is sponsored by Anthroposophy Nashville. For more information, see anthroposophynashville.org. Download pdf flyer here.

Glen Williamson, a founding member in New York City of The Actors’ Ensemble and New Directions Theater, trained in the Michael Chekhov acting technique and at The Juilliard School and has acted with the American Conservatory Theater in San Francisco and has toured throughout the US, Canada, the UK Germany and Switzerland. For more information, see anthropostheater.com.

Laurie Portocarrero trained in the Chekhov method under Ted Pugh and Fern Sloan, and has studied and taught movement, drama and speech in the US and abroad. Waldorf-educated, Laurie holds a BA in Theater Arts, and also trained at Sunbridge College and Rudolf Steiner College. She currently teaches a one year course The Art of Acting. For more information, see threefold.org.

This entry was posted on October 1, 2014 by Anne Nicholson. It was filed under Past Events .